I’ve discovered quite recently the problem with focusing, developed through lack of sleep, kids, dogs and visitors and enriched by the overall laziness of human nature, is beginning to bother me. I’m not moving forward towards any declarations, but would like to share some of the distractions occupying me recently.

Books first. I’ve finally had the pleasure of reading ‘Ack-Ack Macaque’ by Gareth Powell and it was amazing. I have to admit I started reading worrying it will be one of those books with a slapstick idea run over and over again. I was very much and pleasantly surprised when it turned out to be a rich AND funny science fiction. I have previously read Gareth’s short stories (which are quite excellent as well), but ‘Ack-Ack’ made me want more of the characters. I could go on here and rant more about them, but instead I’ll just say: read the damn thing! You won’t be disappointed.

Moving to movies. With not much time together to venture into the world of cinematics, we (myself and wife) recently managed to scape up some time to watch the ‘Europa Report’. It is… and interesting movie. Not much in terms of action, no great names at the beginning, but it has enough story to keep you seated through the whole thing. The things I specifically liked were the neatly shown isolation through enormous distance from Earth and the claustrophobic feel of the inside of the ship. It reminded a little the good atmospherics of the ‘Apollo 18’ movie. And I know the aliens there were… well let’s just say obsolete. But that movie very nicely shown the innate lack of space in outer space. The music was also appropriate and played well alongside the picture, so if you want to know what happened to a crew of astronauts sent further than any man before, do watch it.

Series finally. I recently watched the first season of Black Sails, which is a pirate story of captain Flynt et al. taking place approximately 10 to 20 years before the ‘Treasure Island’. First thing that catches is the really nice soundtrack. Well composed and interesting enough to listen to it on its own. The pirates, ships and all that junk that comes with the territory is also present and more or less accurate. The actors play well and the characters (thank goodness!) are mostly villains, which is repeatedly shown and nicely bottom lined with Benjamin Hornigold’s quotation: “No matter how many lies we tell ourselves or how many stories we convince ourselves we’re a part of…we’re all just thieves awaiting a noose.” One thing that I found obsolete were (excuse the gentle reader) naked tits. And don’t get me wrong – I love to watch naked female body just as much as the next man, but there were few instances where those shots didn’t really bring anything relevant to the story. Curse of the game of thrones, I suppose.

On the bright side, work with stories is progressing well, so hope there’ll be some good news to share soon.

Let me invite you to the launch of the Bristol Steampunk anthology ‘Airship Shape & Bristol Fashion’. There will be a Victorian picnic with a selection of sandwiches and cake and a glass of home-made lemonade or sparkling kir royale.

There’ll be a fancy dress competition for best representation of a character from the book, (fancy dress is not compulsory!) dramatic readings, and music from Cauda Pavonis.

Picnicker tickets are available in advance from the BristolCon team or bristolcon.eventbrite.co.uk, and cost £15 or £11 with a copy of Airship Shape. Latecomer tickets will be sold (subject to availability) on the door from 8:30 p.m. onwards priced at £5. 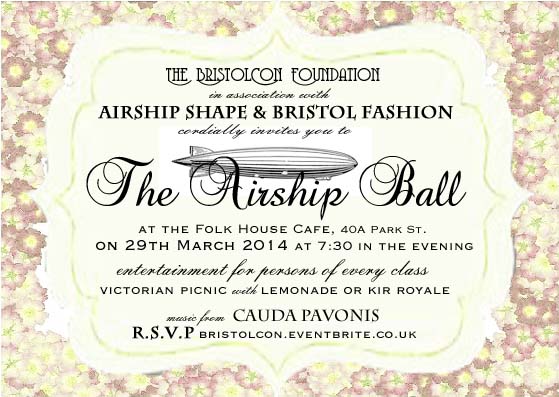 Hope to see you there!