A lot has happened in the last months, therefore my apologies to those few who visit here for keeping quiet.

Life is a strange thing. As is creativity. You can mill over a question in your head, a half formed idea and then just like in a cheap comic book, k-pow, in a middle of an unrelated sentence, halfway down a coffee cup or in a middle of a shower, the complete answer pops into reality. Sometimes. Other times it’s like pulling a millstone on your own – hard and with little visible result until you gather the dust and make bread. The months that has passed from my previous post were a full mixture of both of above. 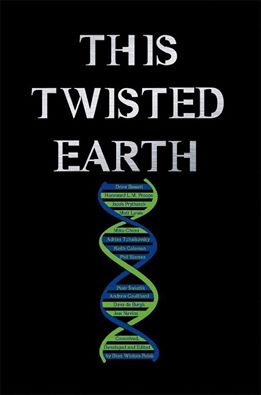 The coming months will also be full of events and work.  Some of it, might even interest you (win
k, wink). Firstly, there is this big event called Fantasycon-by-the-Sea in Scarborough this weekend, which I will be attending. And I would not usually share it with you if not the fact that I will be present at a launch of “This Twisted Earth” anthology published by Six Minutes To Midnight, which contains my rather long short story. It goes without saying that I am really pleased to be published next to the fine authors listed in the table of contents. Things like that give me a kick in the back side and make me think that perhaps all of this was not a mistake after all.

Anyhow. The event will take place at 1pm Sat 24th, so stop by, grab a glass, chat, perhaps even get a scribble if you’ve bought a copy. The volume will be available at the con or via Amazon here. And… oh what the hell! Paraphrasing LMFAO’s lyrics, I’m thrilled and I want you to know it. We’ve already received some nice reviews on Goodreads. Check them out here. So, Saturday, 1pm, got it, right? See you there.

Moving on. As I said, this is an autumn full of pleasant happenings. I have managed to grab some tickets to see Jean Michel Jarre’s concert in Cardiff for myself and Magda, which was an item on the bucket list to be ticked and a childhood’s dream fulfilled.

Following galavanting in Caerdydd, I will be reading an excerpt from a new short story during the Egyptian event in Bristol Museum’s Assyrian Gallery. Ancient deities and science fiction will be combined for your entertainment, so come along. The event is part of Bristol Festival of Literature, it’s free and details about it can be found here.

And last but not least, I’m looking forward to seeing a lot of you during this year’s BristolCon, which will take place 29th October. I’m not on any panels this year (overslept with the participation form) so should have plenty of time to catch up with friends. And if there really are any gods of wine and tits and roleplay, make them hear my prayer and make them bless the gaming evening!

Traditionally, let me leave you with something for the ear. Or both. Jaromir Nohavica in a Czech blues and Kaminanda in atmospheric piece with flutes.